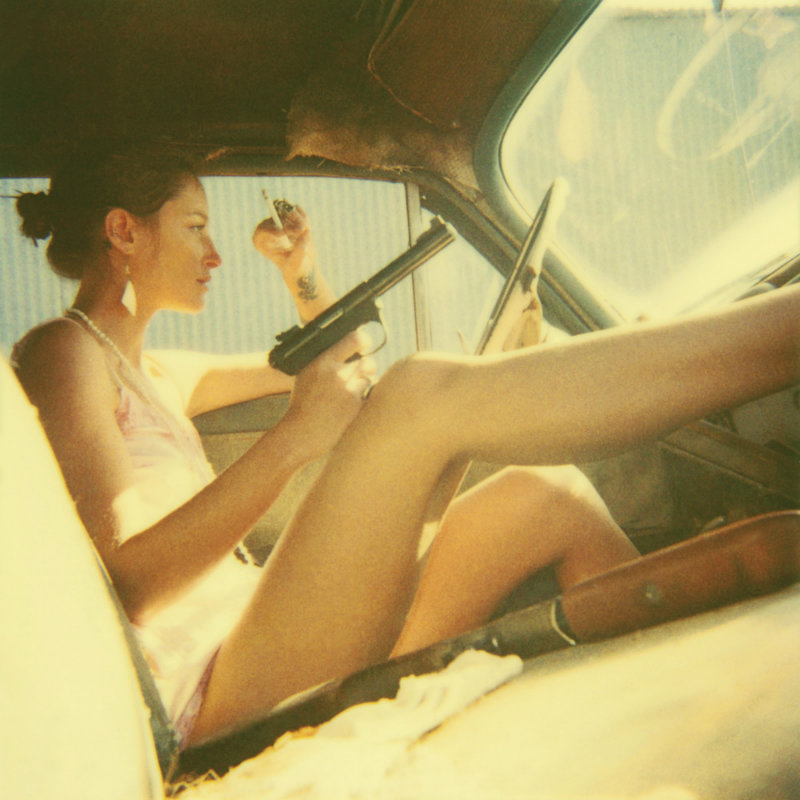 Even though we think he needs no introduction,
It's ok to say few words about this fantastic guy for those few who don't know who he is yet.
(We imagine that you people who are not familiar with his work are not using the internet that much :))

Neil is American photographer + director, whose work has this specific rough/vintage/psychedelic feel. We've red somewhere on the web a perfect description of him - he has young eyes but an old soul.

His body of work ranges from music promos for bands Ladytron, Sea Wolf, Boards of Canada, DRI, and White Flight, to photography and commercial work for collaborative project PULP ART BOOK with Joni Harbeck, to shooting and directing his feature film “INVISIBLE PYRAMID”.

+ He's supernice, and doing this little online chitchat  with him was really fun.

1) When did you start taking photos and what did you photograph?
About 5 years ago I picked up the camera and started photographing Kalee Forsythe & Ainsley Burke
who play the lead roles in my film.  Before then I was a dabbler and didn't put any effort into the craft but
when I photographed the girls I had a purpose and vision in mind.

*Those photos can be seen here - INVISIBLE PYRAMID

2) Can you describe an evolution in your work from your
first projects to the present day?
It changes all the time so it's difficult from me to describe how and what evolves because most of it's minutiae over time.
For the first couple of years I was simply trying to create an identity within the work.
All of this was based on experiments with different films and the process of how I finish a piece and so forth.  Towards the end of 2010, I had confirmed that I would be working with Ladytron again for the 'Gravity the Seducer' album, and I was ready to take a turn creatively with that project.  To me that's more of a question for the viewers that look at the work.

3) Which magazine first published your work?
I don't remember to be honest.
4) What’s your favorite magazine?
I always pick up Waxpoetics, National Geographic, and Cinema Retro.
Occasionally I'll pick up CineFex, American Cinematographer, and others I can't think of at the moment.
All the best magazines are no longer around.
Years ago I loved Res magazine and couldn't wait to get it in the mail.

5) Did you shoot for them?
Never had a chance.
6) What catchphrase do you use the most?
I don't have one but if I did my wife would probably tell me to shut up.
7) What was the last film you watched?
I caught the newly remastered version of Jean Rollin's 'The Iron Rose' on TCM.
Kino Lorber did an incredible job restoring those old negatives.

8) Upcoming projects you're looking forward to?
I have a bunch of killer projects in post production but my producers scold me when I divulge too much in interviews about projects that haven't been released yet.
In the next few months I'll be releasing a ton of new work with bands and have a gang of new videos as well.  That's all I can say.

9) A few people you would love to work with?
Madlib is someone I've wanted to work with for a long time.
That's something I might try and pursue in the near future.
At some point I would like to collaborate with my artist friends on some sort of self-indulgent art project.
Leif Podhajsky and I have discussed it at length,
but we're both so busy with our day jobs that it's hard to find the time.
Ellen Rogers and I have also spoken about doing something together but it's the same sort of situation with her.

10) Your favorite client so far?
That's a tough one but I'd have to say Modular Records out of Australia.
The whole team is a lot of fun to work with and much more the type of crowd I would hang with outside of working hours.  The people at Scion are really great too.  You wouldn't think a car company would have much personality behind it but the team there is really awesome as well.

11) Recommend us a few new things?
Oh god I'm the last one to be recommending new things.

12) Any cool artists we should check out ?
I'm going to break my own rule about divulging too much information about projects that haven't come out yet.
I working with a new band called IO ECHO here in Los Angeles that are fantastic.
I'm excited about the work I'm doing with them and would tell everyone to check them out.